WordPress database error: [Disk full (/tmp/#sql_61ab_0.MAI); waiting for someone to free some space... (errno: 28 "No space left on device")]
SELECT t.*, tt.* FROM vegas_wp_terms AS t INNER JOIN vegas_wp_term_taxonomy AS tt ON t.term_id = tt.term_id WHERE tt.taxonomy IN ('rl_category') ORDER BY t.name ASC

Did you hear about the enormous cyberattack against Twitter? Why did Google remove Twitter’s carousel from the search results page? How does SERP impact click-through rates? What are the new features Google introduced to RSA? Will an email be GMB users only notification about their listing’s suspension?

In this article, we’ll cover the following digital marketing news:

Numerous high-profile Twitter accounts have been hacked by attackers spreading a cryptocurrency scam. According to Twitter, approximately 130 users have been targeted as part of the cyberattack.

Based on what we know right now, we believe approximately 130 accounts were targeted by the attackers in some way as part of the incident. For a small subset of these accounts, the attackers were able to gain control of the accounts and then send Tweets from those accounts.

Some of the high-profile users whose accounts were hacked include former US president Barack Obama, former US vice-president Joe Biden, numerous billionaires like Elon Musk, Warren Buffett and Jeff Bezos, celebrities like Kim Kardashian West and Kanye West as well as world-famous companies such as Apple and Uber. While we are all still holding our breath to learn more specifics around the attack, we heard through the grapevine that the hacker behind the attack used Twitter’s own Admin tool to spread the cryptocurrency scam which was later confirmed by the company itself.

We detected what we believe to be a coordinated social engineering attack by people who successfully targeted some of our employees with access to internal systems and tools. — Twitter Support (@TwitterSupport) July 16, 2020

As much as such types of scam are pretty common, the scope of the attack is unprecedented on the social network. It’s also unclear how much control over the compromised accounts the hacker had. However, according to Twitter, there were no evidence passwords were compromised, therefore, the company advised password reset is unnecessary.

However, the company has not provided the same certainty when it comes to other personal/private information; including, the contents of direct messages. Will there be a future leak on how Elon Musk and Grimes came up with their recent child’s name – X Æ A-Xii?

23 July 2020 UPDATE: Nearly a week after the major cyberattack on Twitter, the company revealed that the hackers behind the bitcoin scam indeed had viewed private direct messages (DMs) from 36 accounts that were involved in the hack. Additionally, it is believed that the victims of the scam have sent about £93,600 in bitcoin to the hackers. The amount could’ve potentially been higher if a crypto-current exchange had not blocked any further transfers. We may expect more details revealed about the hack once the company posts its financial results by end of today – Thursday, 23rd.

Whoa, looks like Google has demoted the visibility of Twitter accounts in Google Search. Likely related to many accounts being compromised with the BTC scam. Main change I’m seeing is the removal of the prominent real-time tweet carousel format. pic.twitter.com/JQTC7RDn0c

It appears that the carousel box has not only been removed for the affected Twitter accounts but for all. According to Google’s spokesperson, this is a temporary measure following the cyberattack on Twitter; and, the reinstating of the functionality will happen after a careful review.

A study conducted by Sistrix concluded that the average CTR for first position organic search results in Google is 28.5%.

The study also found that after the first position search result the percentage decreases rapidly with the average CTR for the second position being 15.7% and for third only 11%. As for the tenth position, the average CTR is just 2.5%. 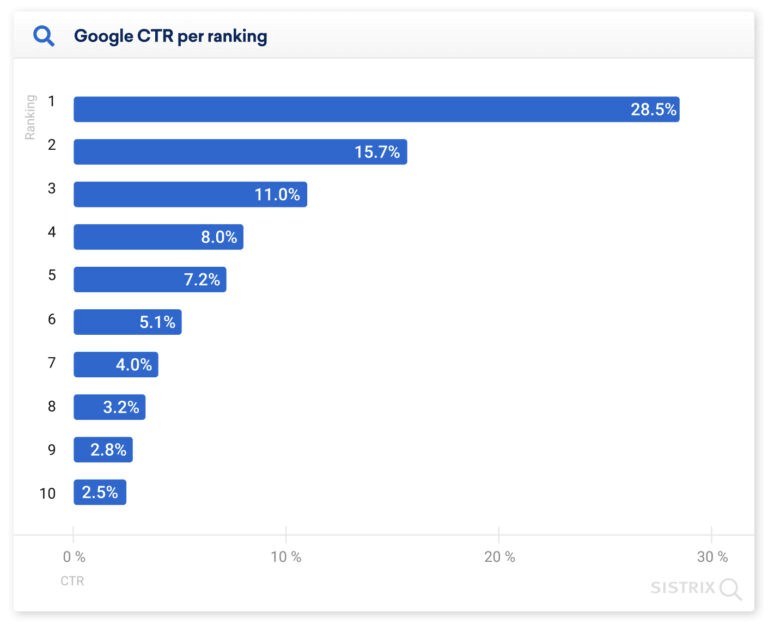 Furthermore, searches for which sitelinks (hyperlinks to website subpages that appear under certain Google listings in order to help users navigate the site) are considered to have a much more satisfying CTR than organic SERPs – 46.9% to 34.2%.

In general, the study confirms keyword search volume is not the only thing factoring when estimating potential clicks.

1) location insertion – advertisers will be able to add where their product/service is offered and once set up, it’ll automatically include city, state or country based on the locations of potential customers;

2) countdown customiser – it will help advertisers promote sales and events in responsive search ads (RSA). For example, if you are a mobile phone reseller and you’ve got a limited sales offer for Samsung S10+, this feature will allow you to automatically show how much time there is left on the deal;

3) copy asset suggestions – this functionality has been improved, giving advertisers the option to create more informative RSA by providing suggestions when an advertiser writes a headline or a description;

4) cross-campaign asset reporting – this feature will allow advertisers to examine more assets at once, recognising what resonates with the customers better and faster; and

5) new recommendations – it will help advertisers improve RSA when their strength is lower ‘good’. When advertisers are checking the optimisation score, they can take a look at the recommendations. They will help identify opportunities for improvement of responsive search ads.

As a result of a new EU law that was recently introduced, Google will now begin notifying Google My Business (GMB) account owners of local listings suspensions by email. However, as shown in the example below, there are no explanatory details behind the reason for the listing’s suspension. 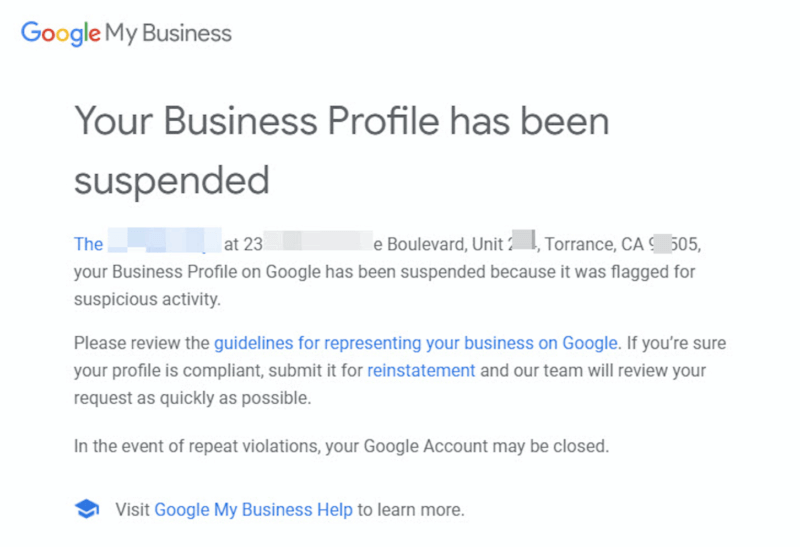 In the past, for a business to find out if their GMB listing was suspended, they had to sign in into their GMB account. Another way to notice was decreased call volume, web traffic and conversions.

Why should you care? GMB not only allows your listing to appear in Maps but also for people to leave reviews (which earns trust), message you directly and increase traffic and sales but most of all, it’s also cost-effective. Suspensions are and have been, the source of a substantial amount of frustration for quite a lot of businesses. So much so, users must make sure their GMB listing is compliant and within the guidelines. However, if you receive such email notification, go through the guidelines again; make any necessary changes; and, request for your listing to be reinstated.

Do you have any suggestions or ideas about which digital marketing news topics you’d like us to look out for in the future? Write your requests below. We’ll keep an eye out (or two) so you don’t have to – and all for FREE, of course. 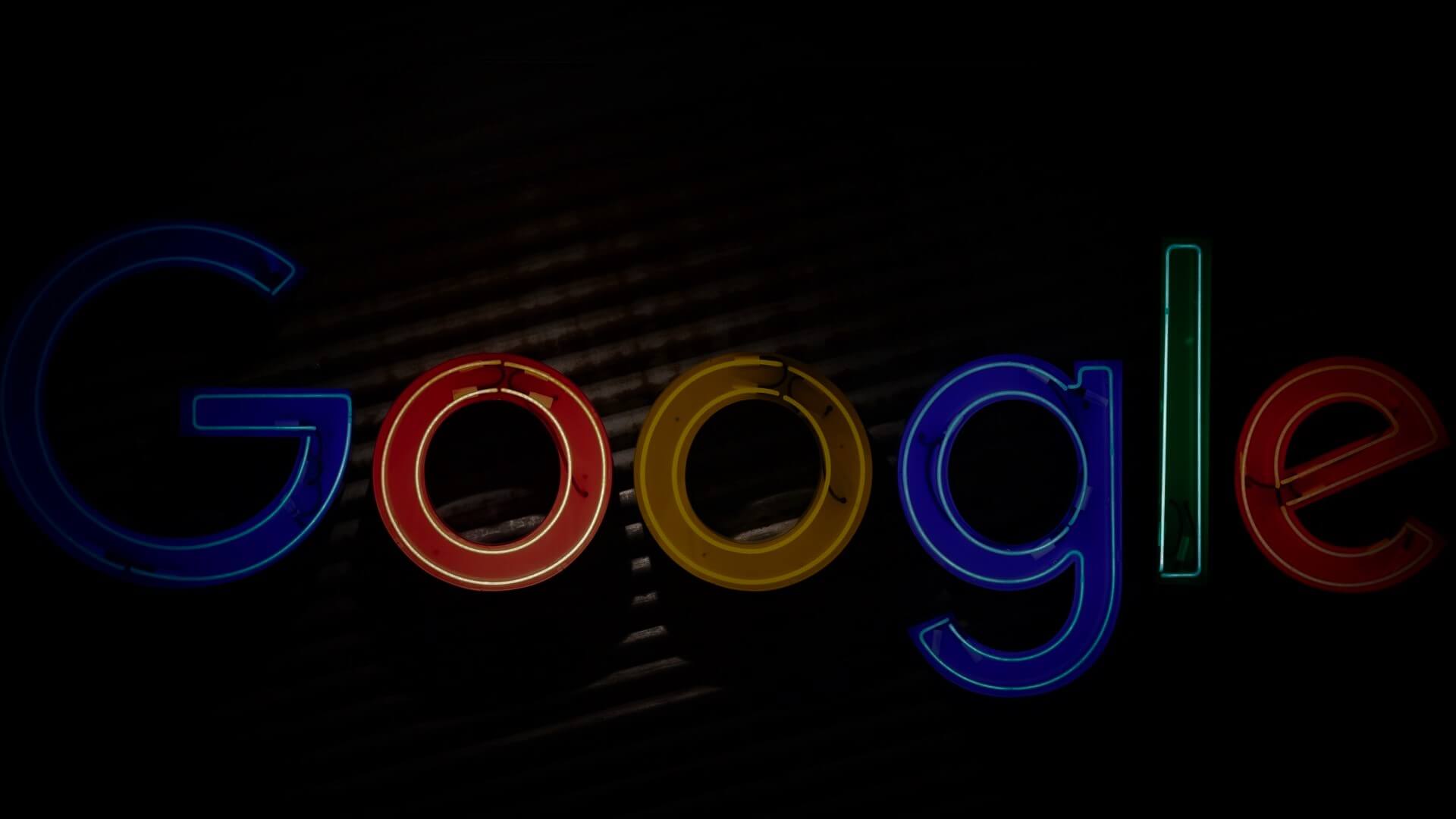 Gmail Has A Huge Upgrade Coming Up

Gmail Has A Huge Upgrade Coming Up